Posted on November 8, 2009 by Bruce
Kincey Potter lauded for work in restoring the South River
By MITCHELLE STEPHENSON For The Capital
COMMUNITY – SOUTH COUNTY
Published 11/05/09

Kincey Potter has been in front of and behind the scenes at the South River Federation since 2003. Last week she was awarded the Unsung Hero award from the Maryland Association of Fundraising Professionals at a reception in Baltimore. 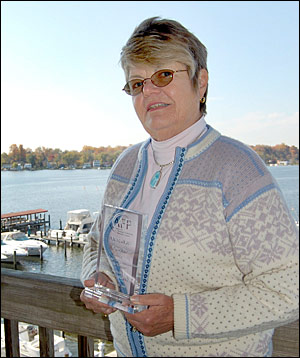 Mitchelle Stephenson — For The CapitalKincey Potter won the Unsung Hero award for her work on behalf of the South River through her organization, the South River Federation, based in Edgewater.

Last November, Campbell was recognized as Maryland Outstanding Philanthropist of the Year for his work on behalf of preserving the Chesapeake Bay. As a recipient of the award, Campbell had an opportunity to nominate someone whom he felt should be recognized as an unsung hero.

Potter was not the founder of the South River Federation, a local nonprofit organization whose mission is to protect, restore and celebrate Maryland’s South River watershed. However, she is credited with taking the organization from a small volunteer group to a staffed nonprofit with a full-time riverkeeper.

When Potter started with the organization in 2003, she’d just retired from American Management Systems, where she was a vice president managing large software systems.

She said that she wanted to get involved “in something to do with the waterways and saving the Bay.”

Potter began as a volunteer, then got into fundraising, and is now the president of the South River Federation, based in Edgewater.

“I was working with a lot of different companies (prior to retirement), figuring out what kinds of software and systems would make businesses stronger. Working with volunteer organizations is very similar in that you have to get people moving in the right direction,” Potter said.

Although the South River Federation had existed off and on prior to 1999, that was the year the group was reconstituted and began its current path of advocacy and river monitoring work.

The history of championing the health of rivers isn’t particularly old. One of the first organizations to advocate on behalf of healthy waterways was on the Hudson River.

In 1966, a group of fishermen worked together to halt construction of a Consolidated Edison power plant upriver from West Point, N.Y. Although the court case took years to resolve, one of the group’s lasting efforts was that they had a riverkeeper, first a volunteer and by 1983, a full-time paid employee, to monitor the health of the river.

By 1999, the idea of having riverkeepers monitor the health of a river had caught on, and the Waterkeeper’s Alliance was born. That group is an association of over 200 riverkeepers across America. There are currently three in Anne Arundel County alone: South Riverkeeper, West/Rhode Riverkeeper and Severn Riverkeeper.

The effort of ensuring that the South River watershed employs a full-time riverkeeper as well as a staff of professionals, including a program coordinator and an executive director is a product of Potter’s efforts to build the South River Federation.

Each year the organization tracks the health of the river through programs that involve not only the efforts of the riverkeeper, but also scores of volunteers. They participate in events like the watershed snapshot, where water quality, bacteria andother data are monitored at the same time in dozens of locations in both the tidal and non-tidal areas of the South River.

“I was very surprised and very honored, and especially pleased to have been nominated by Keith Campbell, because he has done so much to clean up our waters and the bay,” Potter said after winning the award.

Other local winners included Capt. Anthony P. Barnes, nominated by Anne Arundel County Public Schools for his work in creating a mentoring program employing Naval Academy students, and Carol Milli, nominated by Partners in Care for her outstanding service to seniors in the county.

Mitchelle Stephenson is a freelance writer living in Edgewater.