Here’s a summary of the US Beach report for all beaches monitored (in 30 states) — sort of the annual version of what RiverKeeper Capt. Muller does every WEEK for the South River —

Here’s just how filthy that beach water is

Appearances can be deceiving.

The Natural Resources Defense Council (NRDC) has released its annual “Testing the Waters” report, an overview of the nation’s beaches.

You’ll want to read this before taking a dip.

Over the 22 years the NRDC has created the report, 2011 saw the third-highest levels of beach closings and advisory days. What does that mean? What, exactly, would you be swimming in?

Most beach closings are issued because beachwater monitoring detects unsafe levels of bacteria. These unsafe levels indicate the presence of pathogens — microscopic organisms from human and animal waste that pose a threat to human health. The key reported contributors of these contaminants are (1) stormwater runoff, (2) sewage overflows and inadequately treated sewage, (3) agricultural runoff, and (4) other sources, such as beachgoers themselves, wildlife, septic systems, and boating waste.

Oh, neat. Here’s how that pollution has varied as a cause of beach closures over the years: 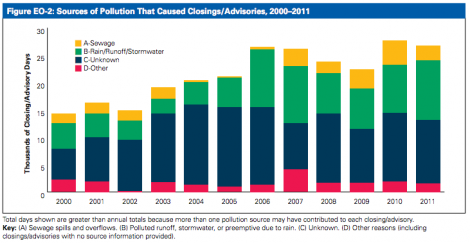 The organization also compiled a list of the worst-offending beaches, those that repeatedly had bad, polluted water. That data includes this caveat:

It is important to note that while a high percent exceedance rate is a clear indication of contaminated coastal recreational waters, it is not necessarily an indication that the state’s beachwater quality monitoring program is deficient or fails to protect public health when beachwater quality is poor.

In other words, the beaches probably don’t let you swim when it’s really bad. We went ahead and put those beaches (both ocean and lake) on a map for you. Pro tip: Check with the proper authorities (cosmic or otherwise) before taking a big gulp of water.

The data, we’ll note, is from 2011. In other words, the beaches above could now be the cleanest in the world! But you probably shouldn’t bet on it.

If you’re more of a glass-half-full-of-clean-swimmable-water sort of person, the NRDC also provides a list of the cleanest states. Delaware, you’re in luck.

In summary: If you leave the house at all this summer, do so in a watertight wetsuit. Or, alternately: If you do go swimming, check this space in a year to see if it explains why you spent August in the bathroom.

Philip Bump writes about the news for Gristmill. He also uses Twitter a whole lot.