Explanations of the Banking Scandal: One via The Economist; the other from Woodie Guthrie

Here’s what the Economist says:  — when you feel your eyes glazing over jump to the bottom to see Woodie’s answer:

The rotten heart of finance

A scandal over key interest rates is about to go global

THE most memorable incidents in earth-changing events are sometimes the most banal. In the rapidly spreading scandal of LIBOR (the London inter-bank offered rate) it is the very everydayness with which bank traders set about manipulating the most important figure in finance. They joked, or offered small favours. “Coffees will be coming your way,” promised one trader in exchange for a fiddled number. “Dude. I owe you big time!… I’m opening a bottle of Bollinger,” wrote another. One trader posted diary notes to himself so that he wouldn’t forget to fiddle the numbers the next week. “Ask for High 6M Fix,” he entered in his calendar, as he might have put “Buy milk”.

What may still seem to many to be a parochial affair involving Barclays, a 300-year-old British bank, rigging an obscure number, is beginning to assume global significance. The number that the traders were toying with determines the prices that people and corporations around the world pay for loans or receive for their savings. It is used as a benchmark to set payments on about $800 trillion-worth of financial instruments, ranging from complex interest-rate derivatives to simple mortgages. The number determines the global flow of billions of dollars each year. Yet it turns out to have been flawed.

The rotten heart of finance

Over the past week damning evidence has emerged, in documents detailing a settlement between Barclays and regulators in America and Britain, that employees at the bank and at several other unnamed banks tried to rig the number time and again over a period of at least five years. And worse is likely to emerge. Investigations by regulators in several countries, including Canada, America, Japan, the EU, Switzerland and Britain, are looking into allegations that LIBOR and similar rates were rigged by large numbers of banks. Corporations and lawyers, too, are examining whether they can sue Barclays or other banks for harm they have suffered. That could cost the banking industry tens of billions of dollars. “This is the banking industry’s tobacco moment,” says the chief executive of a multinational bank, referring to the lawsuits and settlements that cost America’s tobacco industry more than $200 billion in 1998. “It’s that big,” he says.

As many as 20 big banks have been named in various investigations or lawsuits alleging that LIBOR was rigged. The scandal also corrodes further what little remains of public trust in banks and those who run them.

Like many of the City’s ways, LIBOR is something of an anachronism, a throwback to a time when many bankers within the Square Mile knew one another and when trust was more important than contract. For LIBOR, a borrowing rate is set daily by a panel of banks for ten currencies and for 15 maturities. The most important of these, three-month dollar LIBOR, is supposed to indicate what a bank would pay to borrow dollars for three months from other banks at 11am on the day it is set. The dollar rate is fixed each day by taking estimates from a panel, currently comprising 18 banks, of what they think they would have to pay to borrow if they needed money. The top four and bottom four estimates are then discarded, and LIBOR is the average of those left. The submissions of all the participants are published, along with each day’s LIBOR fix.

In theory, LIBOR is supposed to be a pretty honest number because it is assumed, for a start, that banks play by the rules and give truthful estimates. The market is also sufficiently small that most banks are presumed to know what the others are doing. In reality, the system is rotten. First, it is based on banks’ estimates, rather than the actual prices at which banks have lent to or borrowed from one another. “There is no reporting of transactions, no one really knows what’s going on in the market,” says a former senior trader closely involved in setting LIBOR at a large bank. “You have this vast overhang of financial instruments that hang their own fixes off a rate that doesn’t actually exist.”

A second problem is that those involved in setting the rates have often had every incentive to lie, since their banks stood to profit or lose money depending on the level at which LIBOR was set each day. Worse still, transparency in the mechanism of setting rates may well have exacerbated the tendency to lie, rather than suppressed it. Banks that were weak would not have wanted to signal that fact widely in markets by submitting honest estimates of the high price they would have to pay to borrow, if they could borrow at all.

In the case of Barclays, two very different sorts of rate fiddling have emerged. The first sort, and the one that has raised the most ire, involved groups of derivatives traders at Barclays and several other unnamed banks trying to influence the final LIBOR fixing to increase profits (or reduce losses) on their derivative exposures. The sums involved might have been huge. Barclays was a leading trader of these sorts of derivatives, and even relatively small moves in the final value of LIBOR could have resulted in daily profits or losses worth millions of dollars. In 2007, for instance, the loss (or gain) that Barclays stood to make from normal moves in interest rates over any given day was £20m ($40m at the time). In settlements with the Financial Services Authority (FSA) in Britain and America’s Department of Justice, Barclays accepted that its traders had manipulated rates on hundreds of occasions. Risibly, Bob Diamond, its chief executive, who resigned on July 3rd as a result of the scandal (see article), retorted in a memo to staff that “on the majority of days, no requests were made at all” to manipulate the rate. This was rather like an adulterer saying that he was faithful on most days.

Barclays has tried its best to present these incidents as the actions of a few rogue traders. Yet the brazenness with which employees on various Barclays trading floors colluded, both with one another and with traders from other banks, suggests that this sort of behaviour was, if not widespread, at least widely tolerated. Traders happily put in writing requests that were either illegal or, at the very least, morally questionable. In one instance a trader would regularly shout out to colleagues that he was trying to manipulate the rate to a particular level, to check whether they had any conflicting requests.

The FSA has identified price-rigging dating back to 2005, yet some current and former traders say that problems go back much further than that. “Fifteen years ago the word was that LIBOR was being rigged,” says one industry veteran closely involved in the LIBOR process. “It was one of those well kept secrets, but the regulator was asleep, the Bank of England didn’t care and…[the banks participating were] happy with the reference prices.” Says another: “Going back to the late 1980s, when I was a trader, you saw some pretty odd fixings…With traders, if you don’t actually nail it down, they’ll steal it.”

Galling as the revelations are of traders trying to manipulate rates for personal gain, the actual harm done would probably have paled in comparison with the subsequent misconduct of the banks. Traders acting at one bank, or even with the clubby co-operation of counterparts at rival banks, would have been able to move the final LIBOR rate by only one or two hundredths of a percentage point (or one to two basis points). For the decade or so before the financial crisis in 2007, LIBOR traded in a relatively tight band with alternative market measures of funding costs. Moreover, this was a period in which banks and the global economy were awash with money, and borrowing costs for banks and companies were low.

Yet a second sort of LIBOR-rigging has also emerged in the Barclays settlement. Barclays and, apparently, many other banks submitted dishonestly low estimates of bank borrowing costs over at least two years, including during the depths of the financial crisis. In terms of the scale of manipulation, this appears to have been far more egregious—at least in terms of the numbers. Almost all the banks in the LIBOR panels were submitting rates that may have been 30-40 basis points too low on average. That could create the biggest liabilities for the banks involved (although there is also a twist in this part of the story involving the regulators).

As the financial crisis began in the middle of 2007, credit markets for banks started to freeze up. Banks began to suffer losses on their holdings of toxic securities relating to American subprime mortgages. With unexploded bombs littering the banking system, banks were reluctant to lend to one another, leading to shortages of funding system-wide. This only intensified in late 2007 when Northern Rock, a British mortgage lender, experienced a bank run that started in the money markets. It soon had to be taken over by the state. In these febrile market conditions, with almost no interbank lending taking place, there were little real data to use as a basis when submitting LIBOR. Barclays maintains that it tried to post honest assessments in its LIBOR submissions, but found that it was constantly above the submissions of rival banks, including some that were unmistakably weaker.

At the time, questions were asked about the financial health of Barclays because its LIBOR submissions were higher. Back then, Barclays insiders said they were posting numbers that were honest while others were fiddling theirs, citing examples of banks that were trying to get funding in money markets at rates that were 30 basis points higher than those they were submitting for LIBOR. 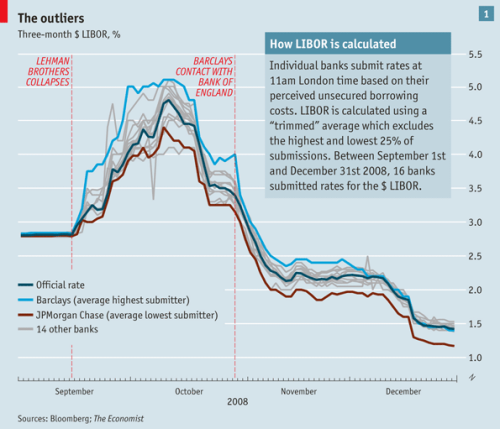