This from GRIST, the good-humored, but scientifically sound environmental on-line magazine. . .

Surprise: Shell’s rig ran aground in Alaska because the company was trying to avoid taxes 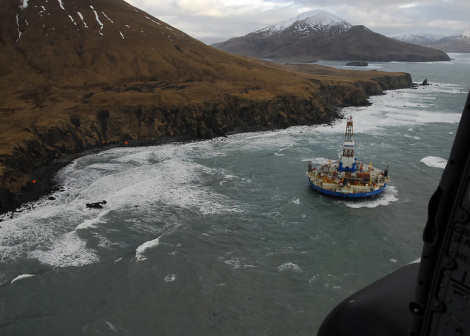 On New Year’s Eve, in the middle of a storm, Shell was trying to tow itsKulluk drilling rig from Alaska to Seattle. Why then? Why risk the bad weather, which, as it turned out, caused the rig to break free from its tugboats and run aground on Kodiak Island?

To avoid paying state taxes, of course. From Alaska Dispatch:

A Shell spokesman last week confirmed an Unalaska elected official’s claim that the Dec. 21 departure of the Kulluk from Unalaska/Dutch Harbor involved taxation.

City councilor David Gregory said Shell would pay between $6 million and $7 million in state taxes if the Kulluk was still in Alaska on Jan. 1.

Ah, but the weather had other plans, sorry to say. Shell will end up having to pay that money after all, and then some.

Gregory said the departure of the Kulluk took money away from local small businesses servicing the rig. He predicted the maritime mishap will prove very costly to the oil company.

“It will cost them more than that $6 million in taxes. Maybe they should have just stayed here,” Gregory said.

The Kulluk grounding is costing taxpayers too. The 630 people working on the unified relief effort include employees of the state of Alaska and the U.S. Coast Guard. Twenty-one vessels are on the scene or nearby, and that doesn’t include aircraft.

Last night, the unified command held a press conference to update reporters on the status of the recovery. In short: Not much has changed. The Kulluk remains where it ran aground. Efforts to determine damage are still incomplete. The tens of thousands of gallons of fuel onboard don’t appear to be leaking.

One reporter asked a pointed question about how forthcoming Shell will be in sharing its assessment of the accident. You can guess the response.

Margie Bauman [reporter from Fishermans News Seattle]:[G]iven the seriousness of this incident, why would Shell’s own investigation of this not be made public along with the Coast Guard investigation? Thank you.

Margie Bauman: Yes. But I’d like to know (cross talking)…

Captain Paul Mehler [Coast Guard Federal On Scene Coordinator]: (Inaudible). But the Coast Guard investigation, as I say, we’re bringing up investigators from the Center of Excellence, and we have our investigators working that. And of course the results of those findings will be made public.

Margie Bauman: And would that include Shell’s …

Amy Midget [unified command representative]: And we will have those said (ph) remarks posted online for anybody who—on the phone system who is not able to hear them.

In other words, don’t hold your breath for Shell to be forthcoming.

There is some good news in all of this, for Shell anyway: The U.S. government shows no indication that it will reconsider the company’s permit to drill in the Arctic.

“The administration understands that the Arctic environment presents unique challenges and that’s why the [interior] secretary has repeatedly made clear that any approved drilling activities will be held to the highest safety and environmental standards,” Salazar spokesman Blake Androff said Thursday. “The department will continue to carefully review permits for any activity and all proposals must meet our rigorous standards.”

Salazar has not given Shell permission to drill deep enough to actually hit oil. The company hopes to get that approval this summer.

Shell didn’t get that permission last year because it was unable to demonstrate to the government that its spill-containment system would work, even after repeated testing.

All this mess so Shell could avoid $6 million in state taxes — an amount equal to 0.1 percent of its profits in the third quarter of 2012. Good to know that Shell puts money over safety. Bodes well.