[An extraordinary essay by Shane Gero, the co-founder of the Dominica Sperm Whale Project, about the cultures of whales, specifically those in the Eastern Caribbean Clan. This essay and the background research more extensively reported in PLOS One, are powerful arguments against the maintenance of the ceremonial Windward Island whale hunting. Read it and share. bp ]

The Lost Cultures of Whales 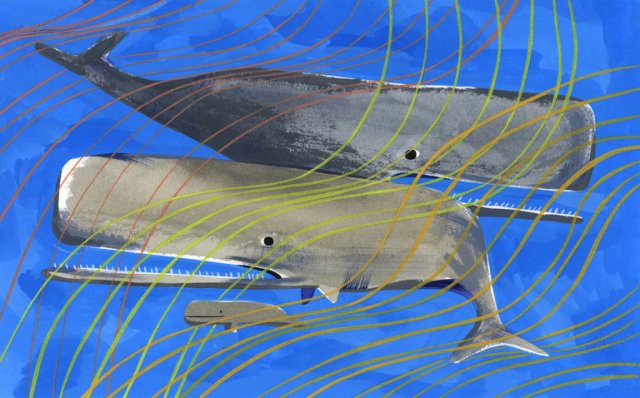 Aboard the Balaena, Caribbean — I am alone on deck, my headphones filled with the sounds of the deep ocean. I have been tracking the sperm whales since 4 a.m. Now the island of Dominica imposes its dark shape in front of the rising sun.

“We have whales!” I shout down to Hal Whitehead, who founded the Dominica Sperm Whale Project with me a decade ago. He puts the kettle on and asks who it is as he comes on deck.

I tell him it’s Pinchy and her calf, Tweak. Tweak is making small suckling dives alongside his mother. Then Pinchy dives, and we move the boat into the calm spot she left behind — the “flukeprint.” We are collecting the whales’ skin and fecal samples and recording the sounds they make on a hydrophone, an underwater microphone. Soon after Pinchy dives, we hear the clicks of her codas — whale social calls; she is talking with Tweak. Then the echolocation starts as she hunts for squid. Tweak slides below the surface in search of his babysitter, Fingers, who is Pinchy’s aunt. Hal and I have breakfast, then wake the crew.

A recording of the 1+1+3 coda that is made only by sperm whales in the Eastern Caribbean Clan. Dominica Sperm Whale Project

The whale families we work with, members of the Eastern Caribbean Clan, are shrinking. Their population is declining by as much as 4 percent a year, as we reported last week in the journal PLOS One, largely a result of climate change and the increasing human presence in these waters. (Whales can be hit by ships or become entangled in fishing gear.) We are not just losing specific whales that we have come to know as individuals; we are losing a way of life, a culture — the accumulated wisdom of generations on how to survive in the deep waters of the Caribbean Sea. They may have lived here for longer than we have walked upright.

Sperm whales live rich and complex lives in a part of the world we find difficult to even explore. And many aspects of their lives appear remarkably similar to our own. Grandmothers, mothers and daughters babysit, defend and raise calves together. Family is critical to surviving in the open ocean, and each has its own way of doing things. The whales live in communities of neighboring families in a multicultural oceanic society.

Behavior is what you do, culture is how you do it. All sperm whales do the same things — feed, swim, babysit, defend, socialize — but how they do them is different around the world. Just as humans use forks or chopsticks, they, too, differ in how they eat, what species of squid they eat, how fast they travel and where they roam, their social behavior, and probably many other ways we still do not understand.

Sounds From a Gathering 0:28

When a family of whales from the Eastern Caribbean socializes they make up to 22 different types of codas, some of which can be heard in this recording of several whales. Dominica Sperm Whale Project

Whales’ codas appear to broadcast their identities. One coda pattern distinguishes individuals, a set of others identifies their families, and a special one marks the cultural clan. The 1+1+3 coda (click pause click pause click click click) is unique to the Eastern Caribbean, is made by all the whales in the Eastern Caribbean Clan, and has remained identical for at least 30 years. Calves spend at least two years learning to make it correctly. And they learn to produce it with great fidelity, which most likely ensures that their clan membership is recognizable over their large geographic ranges and across the diversity of other whales they encounter.

The whales in the Caribbean are distinct, and they appear to identify themselves as distinct. Unfortunately, as a result of a changing climate and human impacts, these urban whales, who live in nearshore waters, are at risk. One in three baby whales born off Dominica will not survive to its first birthday. Tweak’s cousin, Digit, had just begun hunting on her own when she got rope from a fishing net tangled around her tail; now she can no longer dive as well, and is struggling to survive.

Losing a large number of individuals is a tragedy, but what happens when we lose an entire whale culture? What do we lose when we lose a way of life?

Every culture, whale or otherwise, is its own solution to the problems of the environment in which it lives. With its extirpation, we lose the traditional knowledge of what it means to be a Caribbean whale and how to exploit the deep sea riches around the islands efficiently. And that cannot be recovered, not even if the global population of sperm whales was robust enough to support remigration into the Caribbean. These would be different whales, from elsewhere, who do things differently. This region would be profoundly impoverished for the new whales, who would be more vulnerable here. The species as a whole would lose some of its repertoire on how to survive.

Interactive Feature: A Conversation With Whales

Species conservation should not be just about numbers. The definition of biodiversity needs to include cultural diversity. All sperm whales around the world are similar genetically. In fact, recent research suggests that all sperm whales may have descended from a single whale some 80,000 years ago. But genetics may not be particularly helpful when conserving populations of cultural whales. “Genetic stocks,” which we have traditionally used to manage and protect much of the world’s wildlife, simply cannot preserve the diversity of life. Diverse systems are more resilient, and the most important diversity in sperm whales, as in humans, is in their cultural traditions.

I could point to many reasons to protect whales, like the way they mitigate the effects of climate change by cycling nutrients that enable the ocean to reduce carbon in the atmosphere, or how top predators regulate marine food chains. But if we are to preserve life, ours and theirs, we must find ways to succeed together, and value diversity in our societies and in our ecosystems.

Shane Gero, a behavioral ecologist, is a founder of the Dominica Sperm Whale Project.

A version of this op-ed appears in print on October 9, 2016, on page SR5 of the New York edition with the headline: The Lost Cultures of Whales. Today’s Paper|Subscribe