On this, the date of the annual Carnival in Brooklyn, an appropriate time to celebrate the accomplishments of the great steel pan designer and promoter, Ellie Mannette, and his Mannette Musical Instruments. of Morgantown, West Virginia. Ellie of course was a Trini, but he was given national awards and recognitions by both the governments of Trinidad and Tobago, and the USA.
He and his brothers in San Souci, TT, established the Invaders Steel Band in 1940, and by the 1960s he was hired to come to the US to establish the (US) Navy Steel Band.
Details from yesterday’s NY Times obituary. . . .

Ellie Mannette, Father of the Modern Steel Drum, Dies at 90 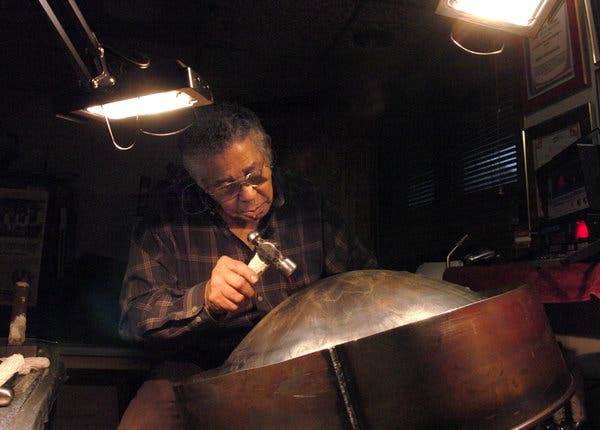 Ellie Mannette crafting a drum at his workshop in Morgantown, W.Va., in 2006. He was among the first to fashion a steel drum that had all the notes of the chromatic scale, so it could play any melody in any key.
CreditCreditvia Mannette Musical Instruments

Ellie Mannette, a Trinidadian musician known in the United States as the father of the modern steel drum, died on Wednesday at a hospital in Morgantown, W.Va. He was 90.

The cause was kidney failure, his daughter Juliette Mannette said.

As a child in Port of Spain, Trinidad’s capital, Mr. Mannette became fascinated with the bands he saw using trash cans and buckets as drums, hitting them in different ways to create different sounds. For the rest of his life, he sought to elevate and expand the craft of steel-pan music, and to share it with the world.

He became a master tuner, builder and teacher. His shop, Mannette Instruments in Morgantown, is a major supplier of the instruments in the United States, and he trained students in tuning at West Virginia University for nearly 20 years. Numerous American universities now have steel-pan ensembles of their own, some led by Mr. Mannette’s former apprentices.

Mr. Mannette was among the first to fashion a steel drum that had all the notes of the chromatic scale, so it could play any melody in any key.

“He imagined a sound of this instrument that nobody else had imagined for it,” Shannon Dudley, an ethnomusicologist at the University of Washington, said in a telephone interview. “He strove to create that sound, and it captivated a lot of people.”

Mr. Dudley added that steel pans, now seen as a symbol of innovation and resistance, were once disparaged. Earlier percussion instruments had been banned by colonialists in Trinidad, and in the 1940s and ’50s the music was associated with rivalries and fights. But Mr. Mannette, he said, “helped to bring it out of that denigrated status, by making the music more and more compelling.”

Today the steel drum is the national instrument of Trinidad and Tobago.

Kim Johnson, the director of the Carnival Institute of Trinidad and Tobago, said that Mr. Mannette’s greatest contribution was how he shared his knowledge generously, even before he left the island.

“He was a natural teacher,” Mr. Johnson said in a telephone interview. “His way of making pans became the first globalized way, the first way you’d find all over the country, from people he taught, from bands whose instruments he made, and from people trying to copy him.”

Elliott Anthony Mannette was born on Nov. 5, 1927, in the small beach town of Sans Souci. His father, Sydney, was a carpenter and mason, and his mother, Imelda, was a homemaker. He was one of nine children.

He gravitated to carnival celebrations and music as a child and joined his first band when he was 11. Before long, he was creating his own instruments out of old oil drums and other discarded items. By 1940, he had formed the Invaders Steel Orchestra with two of his brothers and other musicians.

He designed and tuned the pans for the band, drawing on skills he picked up working in an iron foundry. He fashioned drums out of 55-gallon barrels and made them concave, like a bowl, which gave them a different sound. He tuned the instruments by ear, tapping with a hammer to get the exact note he wanted from the metal.

In 1951, Trinidad and Tobago sent him to Britain as part of the Trinidad All-Steel Percussion Orchestra. By 1959, the band had a contract with Columbia Records.

In the 1960s, Mr. Mannette traveled to the United States to help develop the Navy Steel Band, which brought steel-band music to the American public.

In 1967 he made the transition permanent, moving to New York to work with urban youth in music programs. He would not return to Trinidad until 2000, when he received the Chaconia Medal from Trinidad and Tobago, the country’s second-highest state decoration. That same year, he was awarded an honorary doctorate from the University of the West Indies at St. Augustine.

Mr. Mannette was named a National Heritage Fellow by the National Endowment for the Arts in 1999. He was inducted into the Percussive Arts Society Hall of Fame in 2003.

Mr. Mannette’s shop will continue to be run by his former students and apprentices, said Chanler Bailey, a builder and tuner there.

Mr. Bailey said Mr. Mannette wanted the steel drum to be seen as more than a novelty, and to be respected as a complex instrument. He was, he said, a perfectionist constantly seeking to improve his work and a demanding instructor.

“Ellie was a consummate craftsman,” Mr. Bailey said. “It’s been the greatest privilege to be able to work under that man and the standards he set.”

A version of this article appears in print on Sept. 2, 2018, on Page A20 of the New York edition with the headline: Ellie Mannette, 90, Innovator of Steel Drum. Order Reprints | Today’s Paper | Subscribe