From the St. Thomas Source <https://stthomassource.com/content/2019/03/29/bridge-to-nowhere-illustrates-v-i-s-poor-construction-management/>

[I’m surprised that it’s only been 21 years in the works — I thought this project had been proposed back in the early 1980’s. The other notable fact about this particular site is that it is (or was) the only freshwater marsh in St. Thomas. The extent of the marsh was either 0.7 of an acre, or 0.7 of a hectare, and it was just downstream from the Turpentine Run bridge. As I recall, a study was done by a researcher working for Island Resources Foundation in the early 1970’s — when the kennels and horse stables were established in the area later there was a concern that stream channelization and pollution from the facilities had destroyed the marsh. bp] 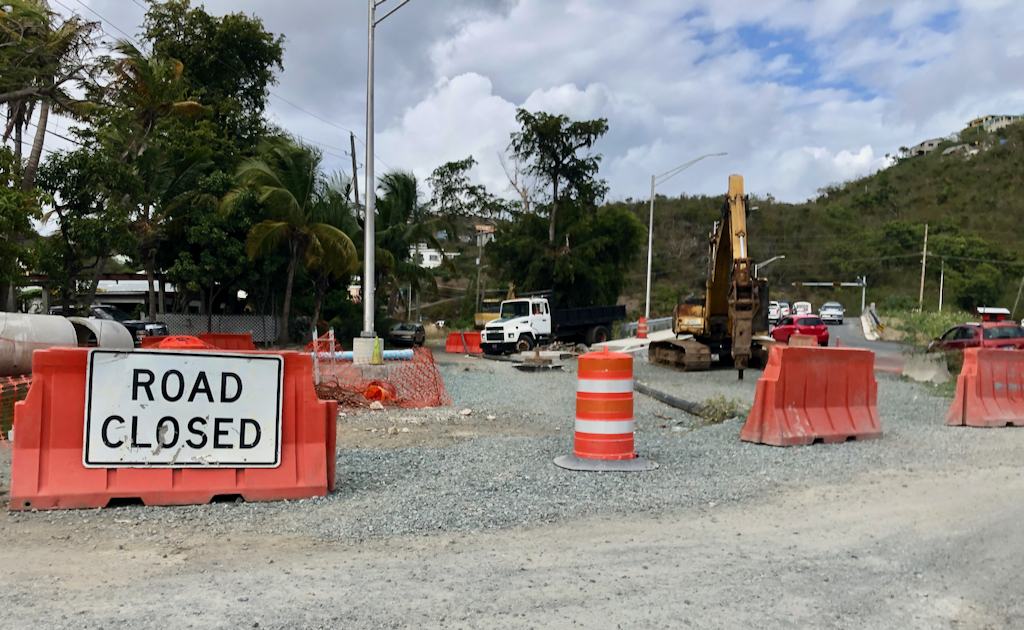 The Turpentine Run project is still a far cry from the architectural rendering.

The architectural drawing for the Turpentine Run project.

The Turpentine Run construction project on St. Thomas stands as a prime example of poor construction management in the U.S. Territory. After 21 years, the joint efforts of the V.I. government and the U.S. Department of Transportation have failed to complete the project.

In 1997, the V.I. and U.S. governments agreed to fund construction of a bridge over a stream that is prone to catastrophic flooding.

Costing more than $28 million to date, Turpentine Run was 87 percent complete as of Jan. 31, the U.S. Department of Transportation reported. The official date of completion is two months away, on May 31.

The architectural rendering of Turpentine Run still looks a far cry from the construction zone that remains today.

On Oct 9, 2018, former Gov. Kenneth Mapp declared it the “Bridge to Somewhere,” and opened the bridge to traffic with a ribbon cutting ceremony.

Although the new bridge was passable on that date, there were no traffic signals and contractors provided a makeshift “round about,” which was nothing more than an asphalt hump. Many drivers ignored the hump and drove directly over it, then navigated the open trenches that remained all around the project.

As of today, the hump and open trenches remain, and there are no working traffic lights.

Still pending is a final inspection by the project manager, Federal Highway Administration, the owners (the V.I. Department of Public Works), and contractor Island Roads Corporation according to Jose David, the Department of Transportation manager assigned to Turpentine Run.

Repeated emails to the V.I. government, beginning on Nov. 13, 2018, asked for detailed financial statements on Turpentine Run or “any completed road project.” There was no reply. After the arrival of Gov. Albert Bryan’s administration in January 2019, emails were sent to VITEMA, DPW, and the Governors Office, again with no response.

On Jan. 11, the Source submitted a Freedom of Information Act request to the Federal Highway Administration asking for detailed financial statements for all road projects on the USVI, specifically Turpentine Run. The Department of Transportation produced documents on March 9 showing verification of funds delivered to the V.I. government totaling $17 million from 2013 to 2017 for the project.

But similar to research into the V.I government, where detailed financial statements are difficult to obtain, the U.S. Department of Transportation took two months to produce six, single page, financial reports. The reports only have major line items, like “Veterans Way, $43 million,” but scant details.

The cover letter from the DOT said, “Certain documents have been withheld which protects attorney-client and other pre-decisional intra-government communication.”

Complicating construction was the need to purchase private property through eminent domain, as well as environmental contamination from an Esso gas station on site. The project was abandoned in 1998, the half-span of the bridge eventually overgrown by vines.

In 2012, when $12 million was budgeted for the project, Wystan Benjamin, who at the time was federal aid program manager at the Department of Public Works, said, “I’m not sure how long it will take to build it but 18 months at least,” he said.

“The bridge was built first to allow for the gut to be moved away from the homes,” according to Benjamin.

In September 2016, Island Roads was awarded a contract for $9.5 million to finish the 0.34 mile project.

Charles Electrical Services, LLC, was awarded a $220,000 contract in September 2017 for traffic signals and lighting.

One professional working in road construction on St. Thomas, who requested anonymity, said there are questionable consultant contracts awarded, and projects show a lack of construction management, skilled labor, and financial control. Yet he went on to say, “Its working better than you think.”

The 2019 V.I. Government Budget lists $61 million in road construction projects, with the largest being $12 million for Main Street enhancements.

The $43 million Veterans Drive project has spent $13 million as of January, according to the DOT, and is reported to be 31 percent completed.

FEMA was contacted about its role in road construction in the USVI since the hurricanes of 2017. Their role is limited to non-federal, local roads. Some work can be done not related to storm damage.

On the home repair program they have obligated more than $222 million for example, sheltering and essential power. There have been repairs to more than 7,000 homes, he said.

For example, FEMA obligated funds for tsunami sirens, then VITEMA has the plans to get the work done, he said.

FEMA provides funding to VITEMA, which provides it to individual agencies like the Housing Finance Authority or Water and Power Authority or Department of Education. They then hire contractors like AECOM or APTIM, which hire subcontractors, who have subcontractors who have subcontractors, on down to the people actually swinging hammers or laying asphalt. The federal government will ultimately closeout the projects and determine if the work was done properly and decide whether to release the funds, Adams said. Meanwhile, the local government agencies would have any detailed financial statements.

This convoluted process may preserve accountability at the federal level but leaves room for smaller contractors to have employees who wait to get paid while the process unfolds.

The most recent financial statement on the VITEMA website is from 2014.

Jose David of the Department of Transportation replied to our emails on March 25. He referred additional questions to DOT Public Relations, which was the same möbius loop that led to the Source filing the January 2019 Freedom of Information Act request.

Editor’s Note: This has been updated to clarify FEMA’s role in the funding process.