Maybe we could get schools like Notre Dame to adopt the Duke-UNC curriculum . . . 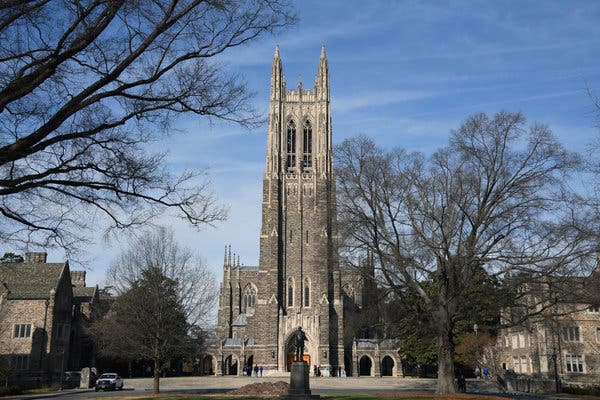 Caption — The chapel at Duke University. The Education Department is investigating a Middle East studies program that the university runs jointly with the University of North Carolina at Chapel Hill.

WASHINGTON — The Education Department has ordered Duke University and the University of North Carolina at Chapel Hill to remake the Middle East studies program run jointly by the two schools after concluding that it was offering students a biased curriculum that, among other complaints, did not present enough “positive” imagery of Judaism and Christianity in the region.

In a rare instance of federal intervention in college course content, the department asserted that the universities’ Middle East program violated the standards of a federal program that awards funding to international studies and foreign language programs. The inquiry was part of a far-reaching investigation into the program by the department, which under Betsy DeVos, the education secretary, has become increasingly aggressive in going after perceived anti-Israel bias in higher education.

That focus appears to reflect the views of an agency leadership that includes a civil rights chief, Kenneth L. Marcus, who has made a career of pro-Israel advocacy and has waged a yearslong campaign to delegitimize and defund Middle East studies programs that he has criticized as rife with anti-Israel bias.

In this case, the department homed in on what officials saw as a program that focused on the region’s Muslim population at the expense of its religious minorities. In the North Carolina program’s outreach to elementary and secondary school students, the department said, there was “a considerable emphasis placed on the understanding the positive aspects of Islam, while there is an absolute absence of any similar focus on the positive aspects of Christianity, Judaism or any other religion or belief system in the Middle East.”

Too few of the Duke-U.N.C. programs focused on “the historic discrimination faced by, and current circumstances of, religious minorities in the Middle East, including Christians, Jews, Baha’is, Yazidis, Kurds, Druze and others,” the department said.

With its actions, the department entered the debate over Israel and Palestinians that has roiled campuses around the country.

The department’s action “should be a wake-up call,” said Miriam Elman, an associate professor at Syracuse University and the executive director of the Academic Engagement Network, which opposes the boycott-Israel movement that has animated campus activism across the country. She added, “What they’re saying is, ‘If you want to be biased and show an unbalanced view of the Middle East, you can do that, but you’re not going to get federal and taxpayer money.’”

“They really want to send the message that if you want to criticize Israel, then the federal government is going to look very closely at your entire program and micromanage it to death,” said Zoha Khalili, a staff lawyer at Palestine Legal, one such group. The department’s intervention, she added, “sends a message to Middle Eastern studies programs that their continued existence depends on their willingness to toe the government line on Israel.”

In a letter to university officials, the assistant secretary for postsecondary education, Robert King, wrote that programs run by the Duke-U.N.C. Consortium for Middle East Studies appeared to be misaligned with the federal grant they had received. Title VI of the Higher Education Act awards funding to colleges “establishing, strengthening and operating a diverse network of undergraduate foreign language and area or international studies centers and programs.”

The Education Department “believes” the Middle Eastern studies consortium “has failed to carefully distinguish between activities lawfully funded under Title VI and other activities” that are “plainly unqualified for taxpayer support,” Mr. King wrote.

The letter, published this week in the Federal Register, said that the consortium’s records on the number of students it had enrolled in foreign language studies — a cornerstone of the federal grant program — were unclear, and that “it seems clear foreign language instruction and area studies advancing the security and economic stability of the United States have taken ‘a back seat’ to other priorities.”

Mr. King wrote that the department believed other offerings, like a conference focused on “love and desire in modern Iran” and another focused on Middle East film criticism, “have little or no relevance to Title VI.” The department wrote the consortium’s programming also “appears to lack balance.”

The department also criticized the consortium’s teacher training programs for focusing on issues like “unconscious bias, serving L.G.B.T.I.Q. youth in schools, culture and the media, diverse books for the classroom and more.” They said that it had a “startling lack of focus on geography, geopolitical issues, history and language.”

The administration ordered the consortium to submit a revised schedule of events it planned to support and a full list of the courses it offers and the professors working in its Middle East studies program. The department also directed the consortium to demonstrate that it had “effective institutional controls” to stay compliant with the administration’s interpretation of the Higher Education Act. The universities were given until Sept. 22, only days before the department is scheduled to approve funding on Sept. 30.

A spokesman for Duke declined to comment, referring questions to the University of North Carolina. A spokeswoman for the U.N.C. acknowledged receipt of the letter.

To advocacy groups enmeshed in academic battles over Israel, the new investigation was not surprising.

Last year, the department reopened a case into anti-Jewish bias at Rutgers University that the Obama administration had closed with no finding of wrongdoing. In reconsidering the case, Mr. Marcus said the Education Department would be using a State Department definition of anti-Semitism that, among other things, labels “denying the Jewish people their right to self-determination” anti-Jewish bigotry, suggesting that it had been adopted by his office. The Education Department has not adopted that definition.

In June, Ms. DeVos said she had ordered an investigation into whether the Duke-U.N.C. consortium had misused any of the $235,000 it received in Title VI grants, including to sponsor an event in March called “Conflict Over Gaza: People, Politics and Possibilities.” Representative George Holding, Republican of North Carolina, had requested that Ms. DeVos investigate whether federal funding was used to host the conference, which constituents had said was rife with “radical anti-Israel bias.”

But some groups came to the defense of the Middle East studies consortium. Tallie Ben Daniel, the research and education manager at Jewish Voice for Peace, a liberal group that advocates Palestinian rights, said the investigation was the latest attempt by the Trump administration “to enforce a neoconservative agenda onto spaces of academic inquiry and exploration.” She called the consortium’s curriculum “rich and diverse.”

To critics like Ms. Daniel, the targeting of the U.N.C.-Duke program appeared to be a continuation of efforts that predated the Trump administration. A group founded by Mr. Marcus, the Louis D. Brandeis Center for Human Rights Under Law, has pressed Education Department and Congress for years to crack down on Middle East studies programs that the center claimed promoted an anti-Israel bias.

But Ms. Elman, the professor at Syracuse, said the department’s scrutiny of the programs was long overdue.

“To get Title VI, you really have to strive for viewpoint diversity,” she said. “This is what our students want. They don’t want to be indoctrinated. They want both sides. It’s possible to do that and still make people uncomfortable.”

In 2014, he wrote an opinion article that assailed the Title VI program for “being used to support biased and academically worthless programming on college campuses,” leaving students and faculty with opposing views “ostracized and threatened.”

“Aside from their intellectual vapidity,” Mr. Marcus wrote, “many of these programs poison the atmosphere on campus.”

He called on the department to establish a complaint process that would prompt extensive reviews of entire programs like the one being undertaken into U.N.C. and Duke.
A version of this article appears in print on Sept. 20, 2019, Section A, Page 1 of the New York edition with the headline: U.S. Demands Colleges Recast Mideast Focus.