Horrible Migrant Die-Off in SW US

from The Guardian, via High Country News < https://www.hcn.org/articles/climate-desk-southwest-experiences-mass-bird-die-off?utm_source=wcn1&utm_medium=email >

‘To see this many individuals and species dying is a national tragedy.’ 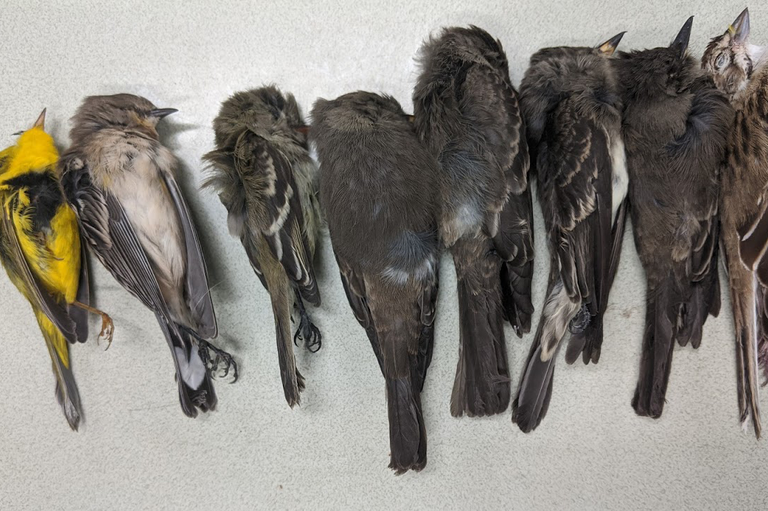 NMSU professor Martha Desmond, biologist in the Department of Fish, Wildlife and Conservation Ecology is trying to find out why hundreds of thousands of migratory birds have been found dead across the state.
Allison Salas/New Mexico State University

This story was originally published by the Guardian and is republished here through the Climate Desk partnership.

Thousands of migrating birds have inexplicably died in southwestern U.S. in what ornithologists have described as a national tragedy that is likely to be related to the climate crisis.

Flycatchers, swallows and warblers are among the species “falling out of the sky” as part of a mass die-off across New Mexico, Colorado, Texas, Arizona and farther north into Nebraska, with growing concerns there could be hundreds of thousands dead already, said Martha Desmond, a professor in the biology department at New Mexico State University (NMSU). Many carcasses have little remaining fat reserves or muscle mass, with some appearing to have nose-dived into the ground mid-flight.

“I collected over a dozen in just a two-mile stretch in front of my house,” said Desmond. “To see this and to be picking up these carcasses and realizing how widespread this is, is personally devastating. To see this many individuals and species dying is a national tragedy.”

Long-distance migrants flying south from tundra landscapes in Alaska and Canada pass over America’s southwest to reach winter grounds in Central and South America. During this migration it is crucial they land every few days to refuel before continuing their journey.

Historic wildfires across the Western states of the U.S. could mean they had to re-route their migration away from resource-rich coastal areas and move inland over the Chihuahuan desert, where food and water are scarce, essentially meaning they starved to death. “They’re literally just feathers and bones,” Allison Salas, a graduate student at NMSU who has been collecting carcasses, wrote in a Twitter thread about the die-off. “Almost as if they have been flying until they just couldn’t fly any more.”

The southwestern states of the U.S. have experienced extremely dry conditions – believed to be related to the climate crisis – meaning there could be fewer insects, the main food source for migrating birds. A cold snap locally between September 9 and 10 could have also worsened conditions for the birds.

Any of these weather events may have triggered birds to start their migration early, having not built up sufficient fat reserves. Another theory is that the smoke from the wildfires may have damaged their lungs. “It could be a combination of things. It could be something that’s still completely unknown to us,” said Salas.

“The volume of carcasses that we have found has literally given me chills.”

“The fact that we’re finding hundreds of these birds dying, just kind of falling out of the sky is extremely alarming … The volume of carcasses that we have found has literally given me chills.”

The first deaths were reported on August 20 on White Sands Missile Range in New Mexico. Initially, incidents were thought to be unrelated, but thanks to online forums, ornithologists noticed that they were happening all across the region. Resident bird species such as curve-billed thrashers, great-tailed grackles and white-winged doves do not appear to have been affected.

Reports suggest some birds have been displaying unusual behavior before dying – becoming lethargic, approachable and congregating in groups. Species that normally rest in trees and shrubs have been seen hopping around on the ground looking for insects, said Desmond.

Large avian mortalities during migration are rare and few have been as large as this one. Records – which go back to the 1800s – show these events are always associated with extreme weather events such as a drop in temperature, snowstorm or hailstorm. The largest event on record in the region was a snowstorm in Minnesota and Iowa in March 1904 that killed 1.5 million birds.

The climate crisis is also changing the tundra landscape where many of these birds breed, while the destruction of rainforests in Central and South America is damaging their winter habitats. Since 1970, three billion birds have been lost in the U.S. and Canada. Mass die-offs such as this can have an effect on populations of both common and sensitive species. Salas said: “We’re kind of coming at them from all sides … if we don’t do anything to protect their habitat we’re going to lose large numbers of the populations of several species.

Carcasses are being sent to the U.S. Fish and Wildlife Service forensics laboratory in Oregon and National Wildlife Health Center in Wisconsin for testing, which is expected to take at least two weeks. Scientists are urging people in the area to log any sightings of dead birds on the citizen science website inaturalist.

Tristanna Bickford, the communications director at New Mexico department of Game and Fish, said it was a possibility that the climate crisis had affected the migration. “Until we get the actual reports back from the National Wildlife Health Center, we can’t say what is happening or is not happening,” she added.

Phoebe Weston is a biodiversity writer for the Guardian. Email High Country News at editor or submit a letter to the editor.