[For years I’ve maintained that until we get transparency in pricing for health services, we will never begin to solve the access/insurance dilemma. As discussed in this “Wonkblog” article from the Washington Post by Max Ehrenfreund, as a result of the Affordable Care Act/Obamacare legislation and a crucial NY State court decision in 2009, some of the price information is now being required, and the resulting analyses have serious and relatively obvious public policy consequences.
Let’s see more of this. (Emphasis added to this article)
bp]

It’s hard to be a small-time family doctor these days, new data shows

The price of health insurance just keeps going up. Until recently, though, a crucial part of how those prices are set was invisible to the public: the negotiations between doctors and insurance companies that determine how much patients are charged.

The story of that contest, carried on fiercely behind closed doors for decades, is now partially in public view, and the new data contains tantalizing clues about where prices for health care really come from.

Health-care providers and insurers have to agree on how much doctors will be reimbursed before doctors begin treating insurers’ clients. Those fees, which depend on the two parties’ relative clout, are an important component of the premiums that patients pay to their insurance companies every month. 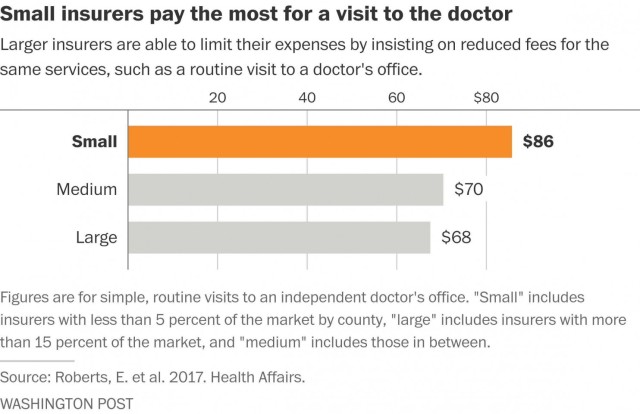 Those discrepancies illustrate why joining forces can be so attractive, for both providers and insurers. Currently, four major health insurers have proposed mammoth mergers. Aetna wants a deal with Humana, and Anthem is aiming to acquire Cigna.

Lawyers for the Obama administration are seeking to prevent those firms from merging, arguing that the combined companies would increase prices for patients and put more financial strain on doctors.

In some cases, mergers can benefit patients. Larger hospitals or doctor’s offices might be able to operate more efficiently, reducing costs. Large insurance companies, by bargaining down rates, might be able to offer their customers a better deal.

On the other hand, major providers can demand more generous reimbursements from insurers, increasing costs instead. If insurance conglomerates are not concerned about competition from smaller rivals, meanwhile, the evidence suggests that they simply pocket additional profits rather than reducing prices for patients.

“Consolidation is often associated with higher prices,” said Laurence Baker, an economist at Stanford University who was not involved in the new study. “Really, if you’re a small player, you get a take-it-or-leave-it offer.”

The data in the study comes from claims compiled by Fair Health, a national clearinghouse for health-care data headquartered in New York. The organization is a product of a lawsuit that lawyers for that state brought against the industry; the case was settled in 2009.

“What we’ve contributed here is looking at prices in a very detailed way that has rarely been possible,” said Eric Roberts, a health economist at Harvard University and one of the study’s authors. “These dollar discounts represent, actually, a large total sum of money.”

Roberts and his colleagues, Harvard’s Michael Chernew and physician Michael McWilliams, classified doctor’s offices and insurers based on their share of the market in each county. The smallest category included firms with less than 5 percent of the market. Firms with more than 15 percent formed the largest category, and a third category comprised those in between.

Small doctor’s offices billed insurers of medium size $72 on average for an uncomplicated, routine visit. A large office would bill the same insurers an average of $86 for the same visit.

Since doctor’s offices often agree to calculate all their prices using a single formula, these figures suggest that a group of doctors working in an independent office could increase their revenue by nearly 20 percent if they sold out to a larger partnership.

According to the figures in this study, the greatest financial penalties associated with size seem to fall on small insurers, which pay doctors substantially more than middling insurers pay for the same services.

Yet the authors focused on only three categories of size and did not break down prices paid by insurers with substantially more than 15 percent of the market. As a result, the figures in the paper could underestimate the benefits of being a very large insurer. Stanford’s Baker noted that if two companies such as Anthem and Cigna merged, the resulting conglomerate would have well above 15 percent of the market in many parts of the country.

The study describes the balance of bargaining power between insurers and doctors at one point in time (the data is from 2014), so the numbers reveal little about how recent mergers might have affected the strategic situation for participants in this market or about how future mergers might affect premiums for ordinary people.

One possibility is that mergers among insurers will induce doctors and hospitals to conglomerate as well, which in turn will encourage greater consolidation in the insurance sector, said Diana Moss. She is an economist and the president of the American Antitrust Institute, which advocates competitive markets.

“The concern is more than just raising prices to consumers,” Moss said. “If the insurers bulk up to become better bargainers, that creates incentives for the providers to bulk up.”