The economic effects discussed here for mid-Atlantic coastal states in the continental USA also operate on housing and other coastal development in the Eastern Caribbean. 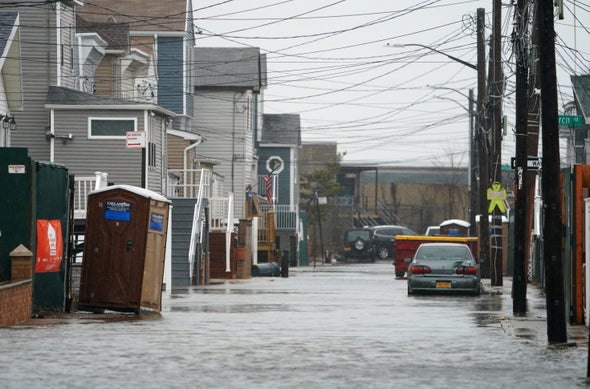 Sea-level rise has cost homeowners on the East and Gulf coasts nearly $16 billion in property value as floods and the threat of flooding drive some buyers away, according to a study released this week.

Analysts at the nonprofit First Street Foundation in Brooklyn studied millions of residential home sales in 17 states from Maine to Alabama and found that coastal property values were rising at a slower rate in flood-prone areas than in areas that did not flood.

“The market is already reacting,” First Street Executive Director Matthew Eby said. “There’s no longer a conversation of what sea-level rise will do in 2050 or 2100.”

Delaware Gov. John Carney said the study shows the need for “a serious, coordinated approach to confront the real threats posed by climate change. It’s clear that climate change already is having real effects in Delaware—the lowest lying state—and in states across our country.”

Carney, a Democrat, said Delaware has worked with a coalition of governors called the U.S. Climate Alliance to cut carbon emissions. “We cannot afford to delay action on this issue,” Carney said in an emailed comment.

The slower appreciation rates are affecting both expensive vacation properties in places such as the Hamptons in New York and middle-class homes in communities such as Norfolk, Va., Eby said. Although much of the $16 billion in eroded value occurred in pricey coastal communities, middle-class areas saw the largest percentage of loss, Eby said.

First Street has released a series of reports since June analyzing the effect of sea-level rise on property in various coastal regions from 2005 to 2017. The group issued its latest report yesterday covering Maryland, Delaware and Pennsylvania, which completes its analysis of all 17 coastal states.

The three mid-Atlantic states were affected moderately compared with their coastal neighbors, largely because they have less coastline than states like Florida and New Jersey. In Maryland, with a population of 6 million, 29,404 homes saw their property values depressed by sea-level rise, losing a total of $556 million in expected appreciation, the study found. Values were affected both on Maryland’s celebrated Atlantic shore and in inland communities along the Chesapeake Bay.

First Street says its study breaks ground by quantifying the effect of sea-level rise in the current real estate market and differs from other studies that have analyzed potential flood damage to homes in the future from climate change.

First Street analyzed 13.3 million real estate sales in the 17 states over 12 years and tried to assess the effect of flooding on sales prices. “We found that places that experience flooding are appreciating at a slower rate than places that don’t flood,” First Street data analyst Jeremy Porter said.

After determining the effect of flooding on properties that had been sold, First Street applied that measure to 26 million coastal properties and found that communities had lost a total of $15.8 billion in expected appreciation. Florida and New Jersey, with their long stretches of densely populated oceanfront communities, accounted for nearly $10 billion of the lost appreciation. They were followed by New York, South Carolina and Connecticut.

First Street seeks to quantify the effects of sea-level rise and has created an online interactive website that shows flood risks to individual properties.

Reprinted from Climatewire with permission from E&E News. E&E provides daily coverage of essential energy and environmental news at www.eenews.net.