From High Country News — one of my favorite (weekly) newspapers <https://www.hcn.org/articles/hike-like-a-girl-to-close-outdoors-gender-gap?utm_source=wcn1&utm_medium=email>

The outdoors gender gap needs to be closed

Women’s tax dollars help fund public land – yet that public asset isn’t seen as safe for all people to enjoy.

Women often wonder whether it is safe for them to hike solo. For me, the answer clearly is yes: I’ve hiked 8,000 miles by myself, pioneered routes in Utah and the Columbia River Gorge, and set an Appalachian Trail speed record. But others argue that in the eyes of a good chunk of women – heck, in the eyes of many people in this country – what I do is an exception.

Which makes me wonder: Since no one questions female pilots, police officers or professional athletes these days, why should hikers be any different?

The truth is, as the daughter of two conservative, middle-class parents, I grew up internalizing the idea, rooted in historic and cultural sexism, that walking solo is unsafe for women, whether in nature or in urban settings. For centuries, unaccompanied women frequently were attacked because women, for religious or cultural reasons, aren’t “supposed” to be out. That’s still true in many countries. Even in supposedly safe places that don’t hold such religious or cultural norms, like U.S. cities, women walking alone experience high rates of street harassment. For women, going into the outdoors sometimes is a confidence issue— the fear of being alone, paired with just the plain, old fear that everyone has going outdoors, whether because of four-legged critters or just the two-legged. 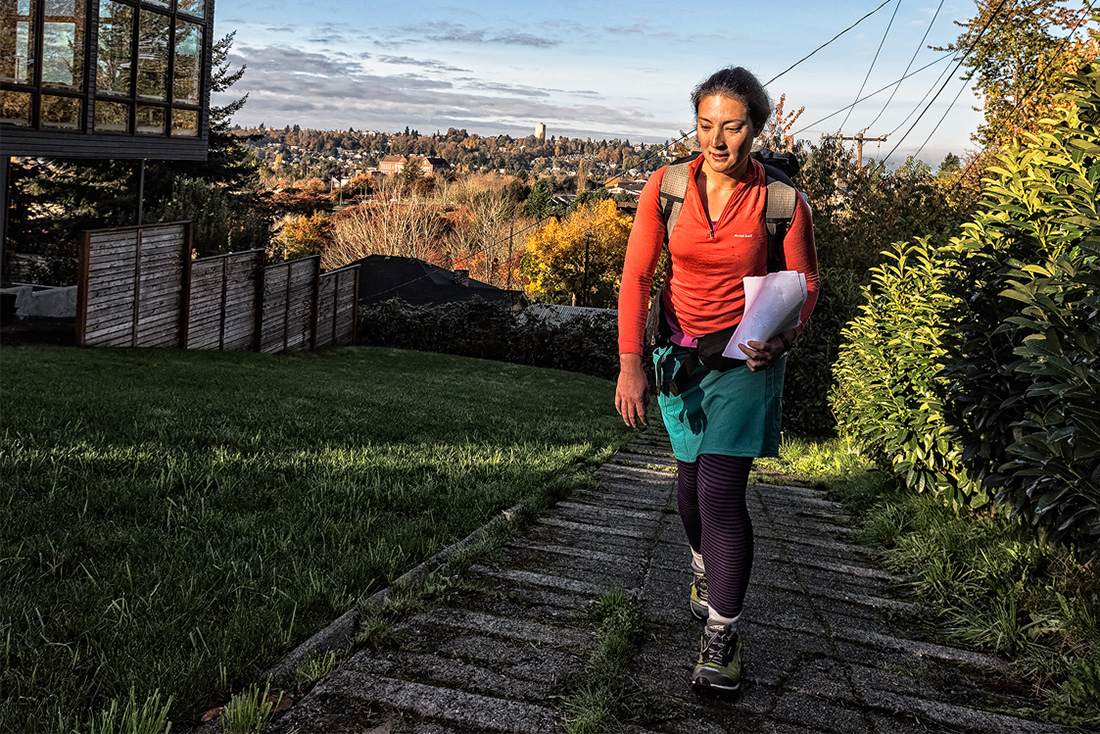 Liz Thomas treks through a Seattle neighborhood on an “urban thru-hike.”
Glenn Nelson/TrailPosse

The perception of the outdoors as “not a woman’s place” even has been reinforced by institutions charged with managing public lands. At its inception in 1916, the National Park Service listed park ranger jobs as “men’s only.” Things hadn’t changed much by 1967. With a line straight out of Mad Men, then Secretary of the Interior Stewart Udall responded to a woman’s discrimination complaint by assuring the public that it was “our concern and affection for girls that prevents our saddling them with the full load of ranger duties.” Sporting airline-attendant inspired uniforms, so-called “rangerettes” were barred from law enforcement training and the ability to carry a gun until 1971. High Country News recently has published stories chronicling decades of sexual harassment and gender bias in the Park Service with a survey showing more than half of the female rangers and three-quarters of the female park police reporting on-the-job sexual harassment.

Despite the cultural taboos, I decided almost 10 years ago to backpack solo from Georgia to Maine on the Appalachian Trail. Those first few nights camping alone I was on such high alert that the U.S. Army Rangers, who use the trail to practice stealth travel skills, failed their mission. As they attempted to sneak past my lone hammock, I shined my headlamp on them. Dejected, the men disappeared into the woods, their training officer chastising them.

The more I hiked, the more I saw that, mile after mile, night after night, nothing bad happened. The vigilance that kept me up at night stirring with every sound quickly seemed unnecessary. My concerns about hiking solo were similar to those of a teenager learning to drive a car: Those first miles are exciting and scary, and then it becomes normal and routine. In fact, solo hiking and camping reinforced my sense that good things happen when going alone. I gained skills, bolstered my self-reliance, and observed and appreciated nature differently than when I hiked with men.

My story of discovery on the trail is not unique. Women have proven they can excel and can even surpass men in outdoor abilities, particularly during the past decade. Jennifer Pharr Davis was the National Geographic Adventurer of the Year in 2012. Heather Anderson is the thru-hike record holder for unsupported treks of both the Appalachian and Pacific Crest Trails. Kristin Gates was the first female to solo hike the 1,000-mile-long Brooks Range in Alaska. Female outdoor adventurers have let their love of the mountains be their reward; their stories rarely get the traction (or, like their sports-athlete sisters, the sponsorship and funding) that male adventure athletes receive.

Still, while elite women are pushing the limits and shattering the glass ceiling, the message that hiking is safe and fun still hasn’t filtered down to your average elementary school girl.

That’s why I urge all women – especially younger women – to get outdoors during Hike Like a Girl Weekend, May 14-15. Whether you hike solo or with other women, the weekend is not only supposed to be fun, it also is meant as an act of defiance against norms that seem 100 years old yet persist today. It’s standing against every stereotype or micro-aggression ever foisted our way – from the women who are told “be safe” instead of “have fun,” to every company that designs women’s gear by shrinking-and-pinking men’s models, to the ranger who asks the solo female hiker, “Are you doing this all by yourself?” Women’s tax dollars also go to fund public land – yet we still live in a world where that public asset isn’t perceived as safe for all people to enjoy. Trees, rivers and mountains should be spaces that feel welcoming to everyone.

Knock on wood, but I’ve never had a problem while hiking alone. I also try to be smart about making sure conditions are right, doing research, and keeping a rational head.

While I’d like to believe my anecdotal evidence – female adventurers like me sharing stories that hiking solo is safe – will inspire other women to get outdoors, either by themselves or with a friend, real change happens when women go out and take that first step in the woods. The real empowering education and confidence comes from showing yourself that you can do something that previously seemed impossible. The experience becomes proof more powerful than any athlete’s testimony that hiking is safe and not a strange thing for a woman to do.

Hike Like a Girl Weekend doesn’t require you to go out and buy fancy gear. A pair of running shoes, polyester gym clothes and a school backpack will do. Bring water, snacks, a flashlight, sun protection and some extra layers. Bring friends or family, too, if you’d like. For just one day or just one weekend, try something completely off your radar – something that seems outside your limits – whether it’s going beyond your routine run, visiting a new park or trail or hiking solo for the first time. You may be surprised by what you learn. Like me, you may find yourself coming back to hike again.

Note: “Hike Like a Girl,” organized by Teresa Baker of African American National Parks Event, encourages females of all ages to walk or hike this weekend, May 14-15, and post about their experiences on social media with the hashtag, #HikeLAG.

Liz “Snorkel” Thomas is a Japanese American fast, light and long-distance hiker who held the unsupported speed record for the Appalachian Trail from 2011-15. She has completed the so-called “Triple Crown” of thru-hiking (Appalachian, Pacific Crest and Continental Divide Trails), and is vice-president of the American Long Distance Hiking Association, an ambassador for the American Hiking Society, the instructor for Backpacker Magazine’s online course, Thru-hiking 101, and author of the newly released, The Best Hikes on the Continental Divide Trail: Colorado. She writes about her adventures at www.eathomas.com and tweets at @eathomas.